Trying to find info on indica vs sativa vs hybrid?

Well, cannabis strains are most commonly characterized as Indica, Sativa, or a hybrid of the two. Indica and Sativa are two distinct cannabis subspecies found in the Cannabaceae family. Throughout most of history, the chemical profiles of each subspecies were distinct and produced fairly predictable effects. The conventional wisdom is that Indica strains are physically sedating, producing a heavy body high, while Sativas are known for eliciting an uplifting, cerebral, head-high. However, due to generations of cross-breeding, virtually every strain is a hybrid. (The exception is landrace strains which haven’t been cross-bred and have preserved their original genetics.)

Because of so much cross-breeding, designations like Indica and Sativa are much less useful than they once were. While these three designations (Indica vs Sativa vs Hybrid) are helpful to find strains that share characteristics and effects, the labels can also be misleading.

In this article, you’ll learn the seven primary differences between indica vs sativa vs hybrid — but with the caveat that you can’t rely on exclusively on these labels. Later in the article, we’ll discuss cannabinoids and terpenes and how they influence the effects of strains. More importantly, you’ll learn how to find the best strain to meet your therapeutic or lifestyle goals. 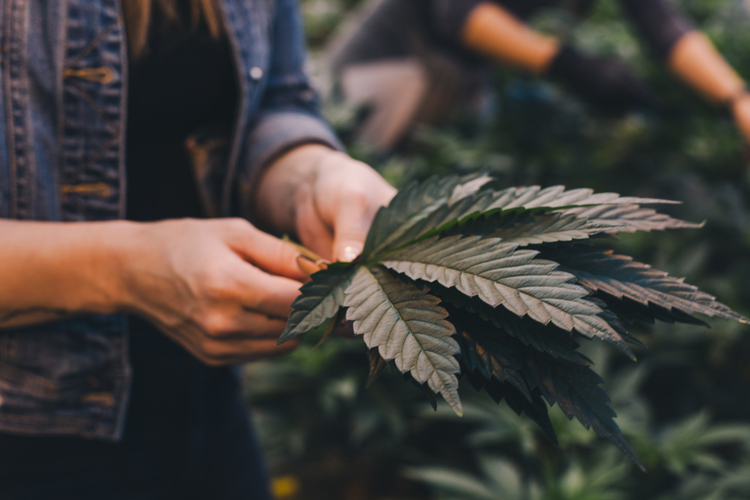 Indica vs Sativa vs Hybrid: 7 Differences

Indicas trace their heritage to cooler climates in Asia and the Middle East, specifically Afghanistan, Morocco, Nepal, and Turkey. These regions are also where hashish first became popular. Sativas originated in warmer countries closer to the equator like Colombia, Mexico, and Thailand. And Hybrids? Well, they’re from about everywhere thanks to cannabis breeding. 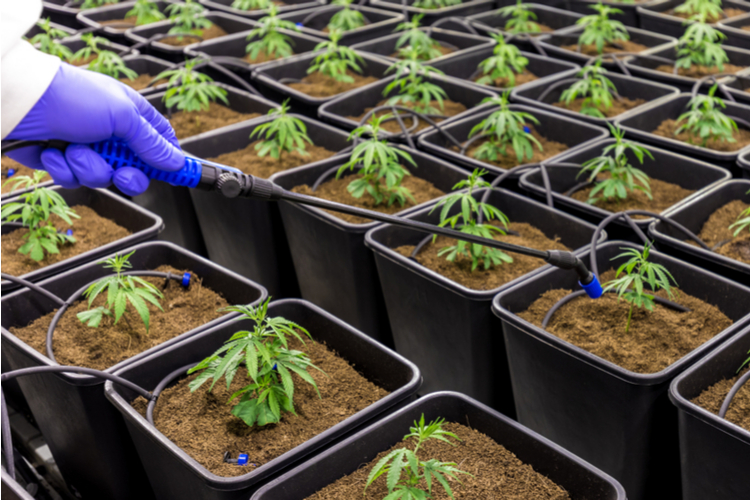 Bottom line, it takes a lot less time to grow Indicas than Sativas.

Indica strains are more like to have a heavy, pungent scent. Usually, the scent can be characterized as sweet or sour. Sativas, on the other hand, are more likely to have a “grassy” scent.

The CBD:THC ratio of Indica-dominant and Sativa-dominant strains are different, although much less so now than before cross-breeding and genetic manipulation aimed at increasing THC levels. Indicas tend to have more CBD and less THC, while Sativas generally have higher THC levels and lower CBD levels. Again, because of cross-breeding, there are countless exceptions to this rule.

While (as noted), relying on designations such as indica and sativa to predict their effects is far from perfect, the list below will provide you with general guidelines. However, we’ll go into more detail later in this article on how to better identify what the best strain is for you based on a strain’s overall chemical profile.

Indicas tend to be best for nighttime use. Common effects include:

Sativas are generally stimulating and better for daytime use. The most commonly reported effects include:

Before we get into the potential therapeutic effects of Sativa and Indica-dominant strains, let’s be clear that the effects identified below are strictly for informational purposes only. The effects of cannabinoids and strains is an ongoing science, with few FDA-approved gold-standard random control trials (RCTs).

None of these statements have been evaluated by the FDA, nor are our products intended to diagnose, treat, cure, or prevent any disease. Ok! Now that we’ve got the requisite legal disclaimer out of the way, let’s look at the largely anecdotal reported benefits and effects of strains that exhibit Sativa or Indica characteristics.

Indica vs Sativa vs Hybrid: How Do I Choose The Right Strain?

As we established, generations of cross-breeding has blurred the lines between Indicas and Sativas. If the Indica vs Sativa, Hybrid designations aren’t consistently reliable, then how can users like you — whether you’re a lifestyle or medical cannabis user — find the best-suited strains for the effects and outcomes you desire? To add another monkey wrench in the gears, everyone’s physiology is unique. So while you may find strains that exhibit Sativa-dominant properties help you become more social and less stressed, other people may find the same strains make them anxious, self-conscious, and reclusive.

Bottom line: It comes down to the chemical profile and a bit of trial-and-error. 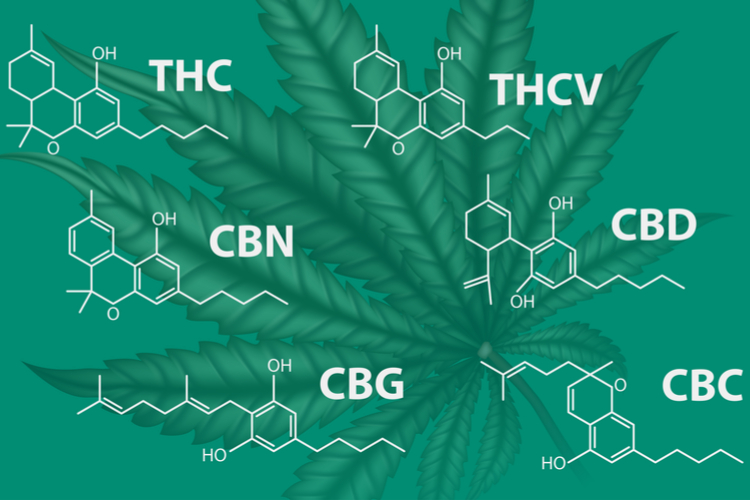 Let’s first look at cannabinoids and terpenes. Cannabis has hundreds of natural compounds in it. Of these, more than 100 are cannabinoids and dozens are terpenes. Depending on the source, there are anywhere from 50 to 120+ cannabinoids. The exact number doesn’t really matter. Only one — delta-9-tetrahydrocannabinol (THC) — gets you high. And, arguably, there are only eight major cannabinoids that significantly influence the effects of cannabis.

Cannabinoids are a class of chemical compounds found in cannabis. (phytocannabinoids) and the human body (endocannabinoids) that can produce therapeutic effects and/or psychoactive effects (THC).

The major cannabinoids are as follows: 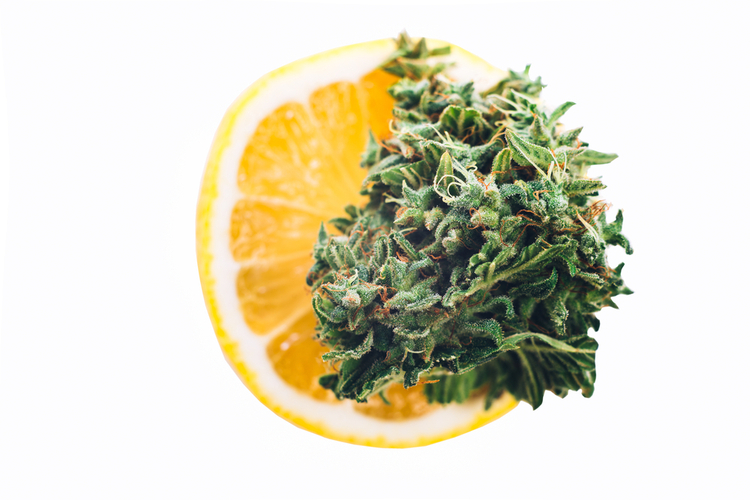 Terpenes are found throughout the animal kingdom in the essential oils of plants, including cannabis. In fact, not only are terpenes responsible for giving each strain its unique scent and taste, but they’re also thought to interact with cannabinoids to produce an “entourage effect.”

A few of the most popular terpenes include:

Caryophyllene is known to reduce stress, promote relaxation, and reduce pain. Early research also suggests caryophyllene may reduce the effects of colitis and Alzheimer’s. (These are early studies and haven’t been validated by clinical trials.)

Limonene is a citrus-flavored terpene most often associated with lemons, though it is also found in many cannabis strains. It’s thought to produce a sense of calm and euphoria when you exhale. Some early research suggests it could also act as an antidepressant.

Limonene is another terpene found in many citruses and cannabis. It may reduce appetite, promote weight loss, and even aid bronchitis.

Ah, myrcene! Not only may myrcene have anti-inflammatory and analgesic (pain relieving) properties, myrcene has been proposed as the mechanism responsible for Indica’s signature “couchlock effect.”

Pinene has a distinct smell that’s found in many cannabis strains. Guess what it smells like. Pine trees. Bingo! Pinene may act as an anti-inflammatory, a bronchodilator, and an alertness agent. It may even counter the short-term memory impairment commonly associated with THC. 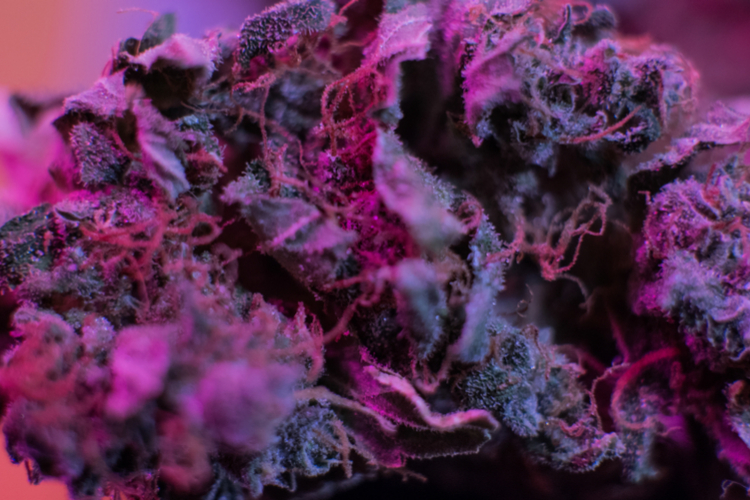 Indica vs Sativa vs Hybrid: Finding the Right Strains

To find your favorite strain or a strain,

Determine What Types of Effects You Want

Decide on a Type of Strain

We know Indica-dominant strains are more likely to make you sleepy and are also great for pain. Likewise, Sativas are great for spurring your creative juices. They’re great for giving your mood a lift, and they can make you more productive.

Finding a strain according to Indica, Sativa or hybrid designation is a good way to narrow down your search. But, you’ll want to dive deeper and look at THC and CBD content and ratios. Indica and Sativa are labels. THC and CBD are the actual active ingredients that have the biggest influence on the effects.

If you’re looking for a euphoric high and relax, then go for higher THC Indica. Conversely, if you’re looking to be alert and productive, find a Sativa that has a nice balance of CBD and THC. Or, if you’re dealing with anxiety and you don’t want an intense high find a high-CBD strain. Also, if you’re THC-sensitive or easily become anxious or paranoid after consuming cannabis, make sure you choose a strain with a decent amount of CBD (at least 2%). CBD, even a fairly small amount, will do wonders to neutralize paranoia or anxiety.

Beyond cannabinoids, consider what terpenes are in the strain. The prevailing hypothesis on why Indicas are more sedative and produce its signature “couchlock effect” is because of a terpene called myrcene. It’s thought that myrcene interacts with THC to unlock a strain’s sedative properties.

Prepare for a Bit of Trial-and-Error

Whether you’re a medical cannabis patient or a lifestyle user, chances are that you won’t find your favorite strain or the strain that’s most effective immediately. It will probably take a bit of trial-and-error before you find the ideal strain. But that’s part of the fun! Don’t give up. Keep trying different strains (and cannabis products) until you find your go-to strain. And of course, if you need any help finding the best strain, that’s what we’re here for. Ask one of our budtenders, and we’ll be more than happy to provide some tips. 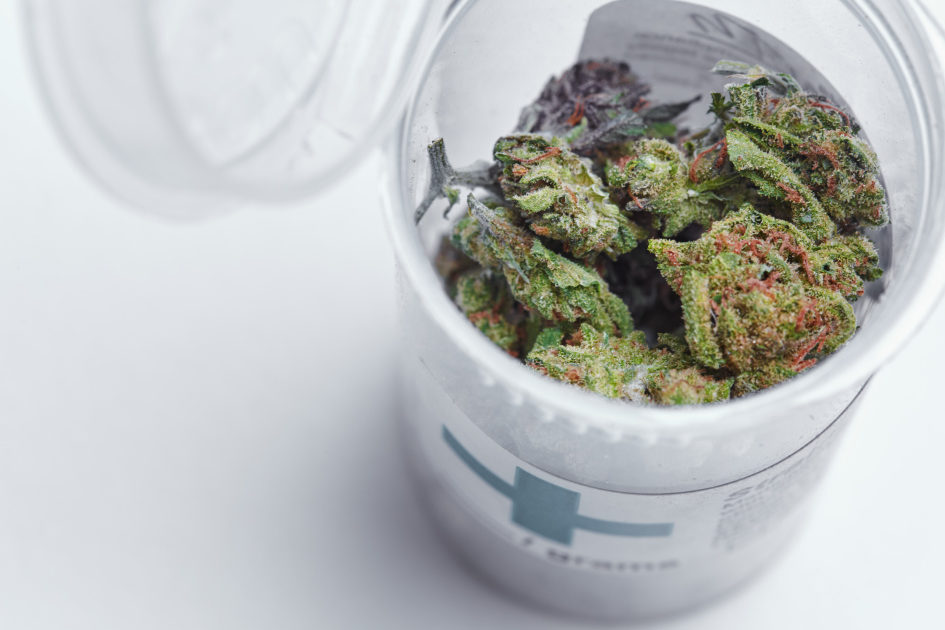 How to Read & Understand Cannabis Labels 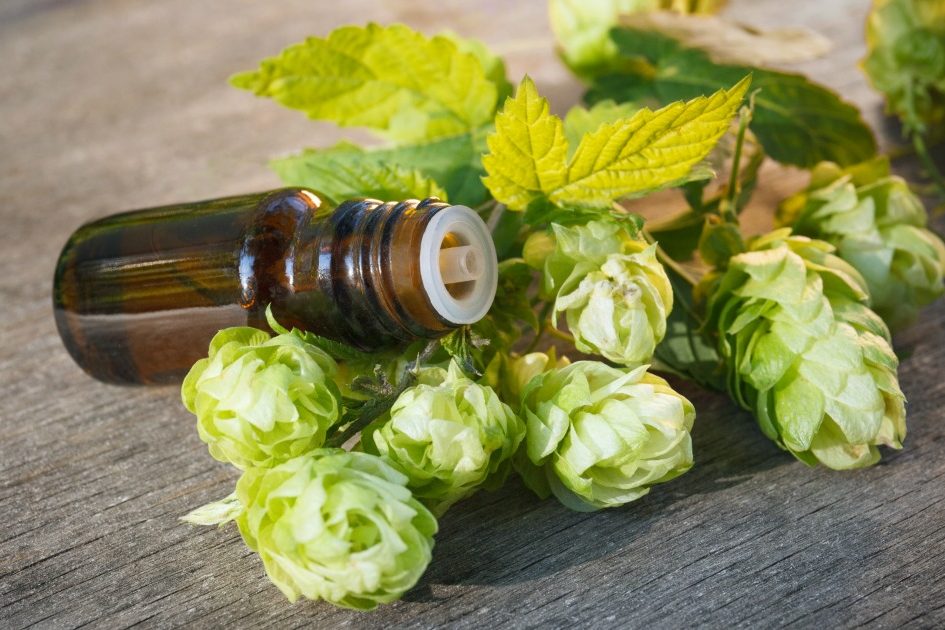 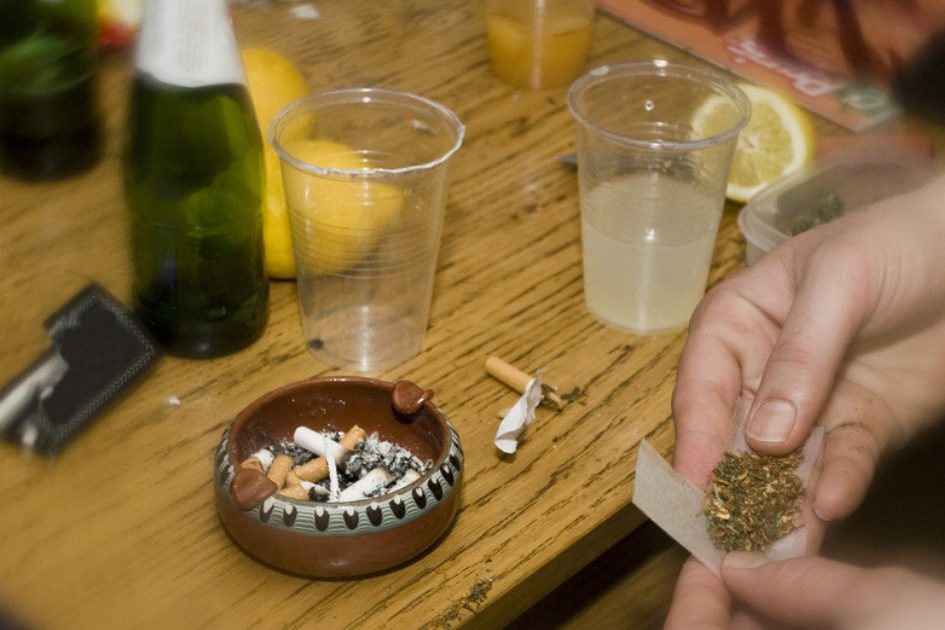 What Happens When You Mix Alcohol and Cannabis? 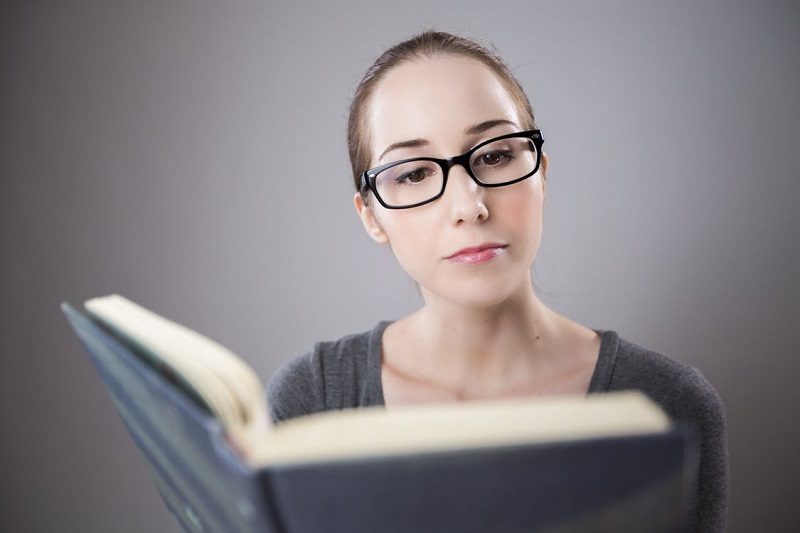